Fancordion is a tool for creating automated acceptance tests, transforming your boring unit tests into beautiful specification documents! It is similar to Cucumber but focuses on readability and presentation. 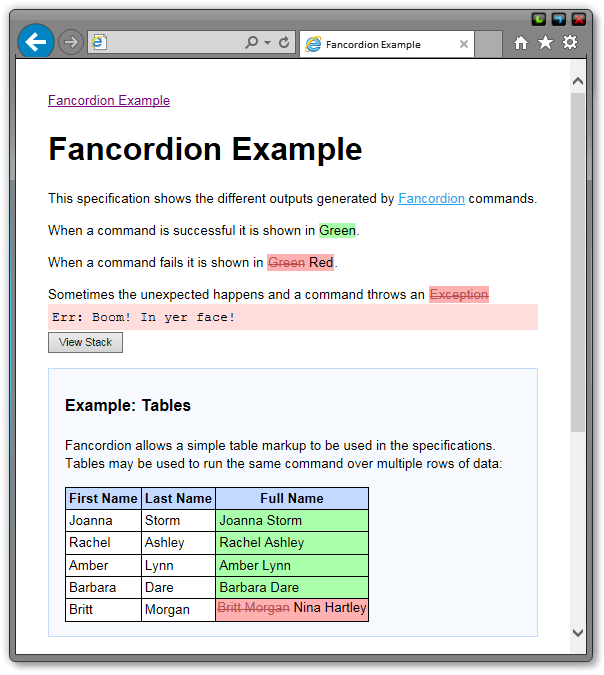 Fancordion was inspired by Java's Concordion.

For a great explanation of how to write great acceptance tests, along with do's and don't's, see Hints and Tips on the Concordion website.

Try changing Hello World! to something else and re-run the test to watch it fail.

Then have greeting() throw an Err... See the stacktrace embedded in the result!

An Acceptance Test is a standard Fantom Test that has been enhanced to verify real user requirements.

The Fixture is the code part of the acceptance test that does the actual work.

Specification refers to the documentation part of the acceptance test.

Commands are special links in the specification that drive the test, specifying input and verifying output.

Any Fantom class annotated with the @Fixture facet can be run as a Fancordion fixture. To run it, just pass it into FancordionRunner.runFixture():

FancordionRunner is designed to be subclassed and has several methods, or hooks, that change it's behaviour:

Run as a Fantom Test

Fancordion fixtures can also be run as standard Fantom tests.

To help you bridge the gap between Fancordion and Fantom tests, Fancordion ships with a handy FixtureTest class. Extending FixtureTest lets you run any Fixture as a Fantom Test.

If you plan to run Fancordion tests from a pod, then you'll need to alter the build.fan slightly. By default, documentation for Test files are not included in a pod. This means your Fancordion tests loose their specifications. To re-include, add the following:

Alternatively, you could include the Test source files in the pod.

Specifications are documents written in Fantom's own Fandoc format, similar to Markdown and Almost Plain Text.

By marking text in the specification as links, you turn them into commands. Your specification can now be thought of as a simple script.

When you run the specification script, the Fandoc is converted into HTML and the commands executed as they are encountered. The commands generate HTML markup to show whether they passed or failed.

By default the specification is assumed to be the doc comment on the fixture:

By doing so, every line in the doc comment must start with a double asterisk **.

Specifications can be written in any way you wish, but the following structure is very useful. It is written here as a fandoc comment so you may cut and paste it into your specifications.

The specification may also exist in its own file. To do so, just ensure the Fixture / Test has no fandoc comment and Fancordion will walk the current directory tree looking for a file with the same name as the fixture, but with an extension of .specificaion, .spec or .fandoc.

You may also give a URL (relative or absolute) to its location in the @Fixture facet:

Relative URLs are relative to the directory Fantom was started in. If the URL is a directory then a file with the same name as the fixture is looked for, but with an extension of .specificaion, .spec or .fandoc.

Note that specifications, when they exist in their own file, do not start each line with a double asterisk **.

TIP: Use Explorer App to edit fandoc files and specifications.

Specifications are looked up in the following order:

The exhaustive lookup proceedure allows Fancordion to run from IDEs such as F4; just ensure that the working directory is that of the project (and not the test) so file walking finds all the src and spec files:

Note that when looking for source files, the source file must have the same name as the class.

All hyperlinks in a Fancordion specification are interpreted as commands. A standard fandoc hyperlink would look like:

Fancordion hijacks this syntax and uses them as commands. Commands are generally broken down as:

The text is generally shown in the resulting HTML, the scheme is always the name of the command, and the path is contextual information passed to the command itself.

The exact nature or syntax of the path depends on / is different for each command, but often it is either a snippet of Fantom code or a plain string.

Commands such as set, verify and execute treat the path as a fantom expression that is run against the Fixture. So the command

would call the echo() method on your fixture.

As shown above, when referencing classes not in sys or the same pod as the fixture, they need to be fully qualified.

Fancordion lets you use some pre-defined macros, or constants, in your Fantom expressions. The most common macro is #TEXT which refers to the text part of the command. Guess what this command does: (!)

The other common macro is #FIXTURE which lets you reference your fixture. So if your fixture had a field called name, you could print it with:

See the table section for other table specific macros.

Note all macros must be UPPER CASE.

The aliases may be used anywhere in place of the full command. Example:

The set command sets a field in the fixture to the value of the link text. Example, this fixture command sets the age field to 42:

The property expression may be any valid Fantom expression, no matter how complex, as long as it references a field.

Note how in the above example the Str 42 is automatically coercered to an Int. This is a useful feature, but is only available for simple, dot separated, expressions.

The execute command calls a method on the fixture. The cmd is compiled and executed as Fantom code:

execute cmds may use macros such as #TEXT, and / or pass parameters to methods. Here is a more complex example:

The verify suite of commands execute a Test verify method against the link text. Available verify commands are:

Arguments to the verify methods are run against the fixture and may be any valid Fantom code.

Similar to execute except the expression must throw an Err of the specified type.

Note that the Err Type may or may not be qualified, for example the test will match both sys::ArgErr and ArgErr.

The command will also strip any trailing # from the err type, allowing you to type sys::ArgErr# and ArgErr#, which feels more code like.

Any thrown Err is kept so you can subsequently check the msg:

Note that to verify a previously thrown Err, leave the cmd path empty.

Similar to verifyErrType except that the Err must have the specified message.

Any thrown Err is kept so you can subsequently check the type:

Note that to verify a previously thrown Err, leave the cmd path empty.

This simple command fails the test with the given message. Example:

The run command runs another Fancordion fixture and prints an appropriate success / failure link to it.

The command path must be the name of the Fixture type to run.

Use run commands to create a specification containing a list of all acceptance tests for a feature, in a similar way you would use a test suite.

You could even nest specifications to form a hierarchical index, with results aggregated to display a single green / red / grey result.

As seen above, the command path may take an optional # character as a suffix. This is the same syntax that Fantom has to specify Types. Using the # suffix can help you remember what the text represents! The fixture type may also be qualified.

The link command renders a standard HTML <a> tag. It is added with the file, http, https and mailto schemes.

You can also link to other fixtures using the scheme link and the class name. Note the class name may, or may not be fully qualified.

The embed command executes the given function against the fixture and embeds the results as raw HTML.

Use it to add extra markup to your fixtures.

todo simply ignores the command. Handy for commenting out tests.

Pre-formatted text may be used as the input for commands by writing the command URL as the first line of the text:

Note that pre-formatted text may also be any line indended by 2 or more spaces. Meaning the above may be re-written as:

Above and beyond normal fandoc syntax, Fancordion also has support for tables. (Yay!)

To render a HTML table, use preformatted text with table: as the first line:

Table parsing is simple, but expressive. The first line to start with a - character defines where the column boundaries are. All lines before are table headers, all lines after are table data. Any lines consisting entirely of - or + characters are ignored.

That means the above table could also be written as:

You can specify commands for each column, to be run for each row. After the table: declaration, write commands on seperate lines prefixing them with col[x]+ to specify on which column they should operate. Use the #TEXT macro to reference the text in the column / table cell.

The following example tests that each name can be split up into a first name and last name:

There is also a special col[n] command which is run on every column. This command makes use of the #COL macro which relates to the (zero based) column index being processed. Example:

Similar to column commands, you can specify commands to be run on each row. Use the prefix row+ when declaring a command.

Use the #ROW macro to inject the 0-based index of the row being executed.

Note: Using both column and row commands in a table is not allowed.

verifyRows is a special table command that verifies that rows in the table are identical to a given list.

The fixture is marked as a failure should any item in the list not equal it's matching table row. Should the list contain too few or too many item, they are rendered as failures in the rendered HTML table.

verifyRows may also be applied to a 2D table, in which case a list of lists must be provided:

Fancordion can be used to test BedSheet applications.

Typically one would start the web application under test (via Bounce) in the runner's suiteSetup(). Since all web application state is (usually) stored in a database, there is little need to re-start the web app for every test. While this only saves you a couple of seconds, over the course of many tests it can add up to be quite a time saver!

Web application shutdown would then occur in the runner's suiteTearDown() method.

Below shows a typical FancordionRunner setup for a web app together with an abstract WebFixture class.

Note that most of the methods could, or rather should, be moved to WebFixture for reuse.

As your website grows, a common problem you may encounter when testing, is you visit Page A but through redirects or error handling, it is actually Page B that gets rendered. So just because no errors are thrown, it doesn't mean everything is okay.

If you're using Pillow then it's easy to assert that the page you visit, is the page rendered. Being able to use class names instead of URLs also makes your code more refactor friendly.

The following code is the same test, but written with Pillow in mind:

Again, most of the above methods should be moved to a common base class / mixin for reuse.